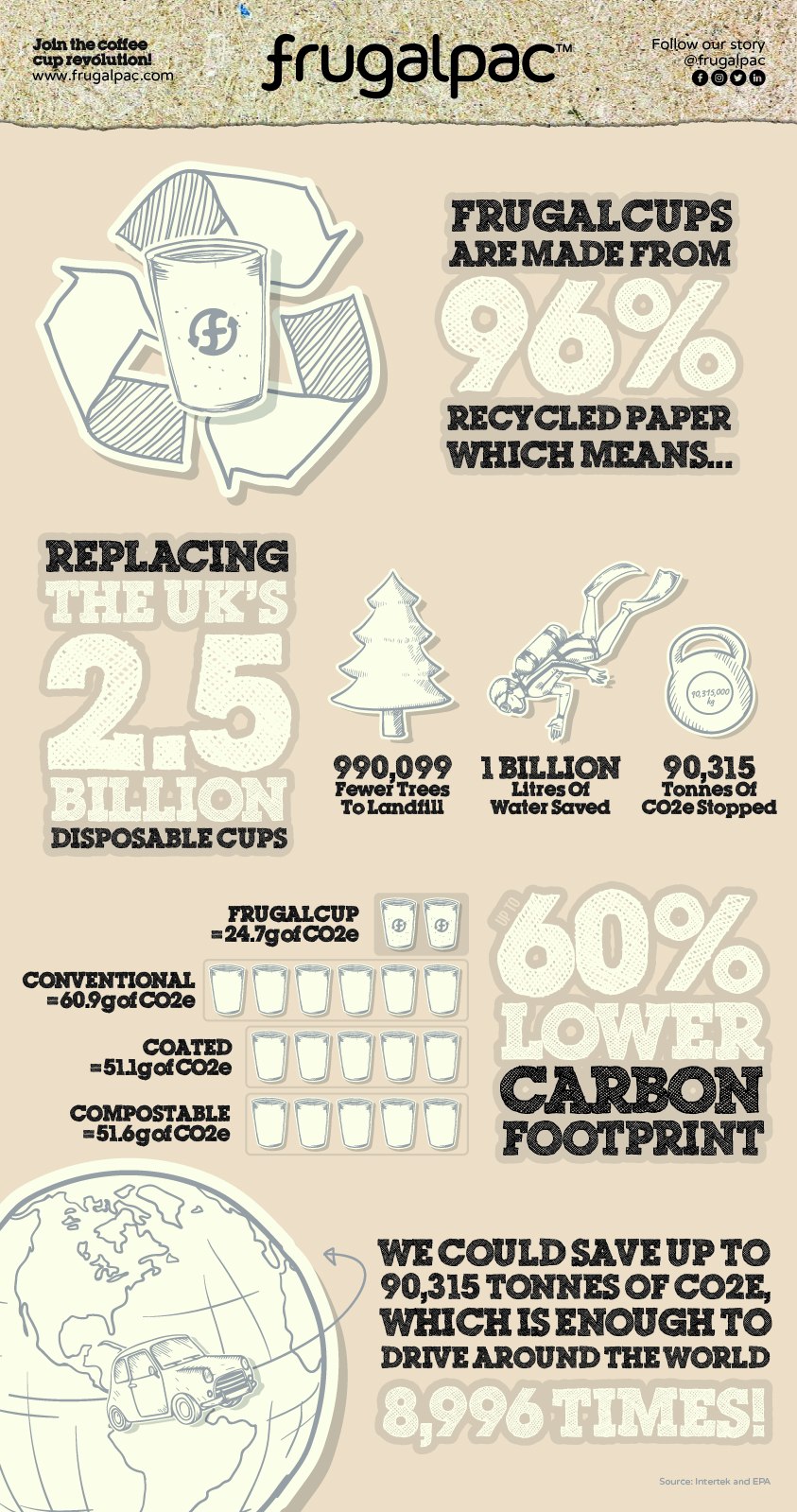 A ground-breaking new study released on Earth Day (April 22) reveals the world’s first recyclable coffee cup made from recycled paper, the British-made Frugal Cup, has a carbon footprint up to 60% lower and a water footprint up to 74% lower than conventional and compostable cups that would globally save up to 200 million trees and  215 billion litres of water a year.

The independent Life Cycle Assessment (LCA) analysis  by Intertek, one of the world’s leading Total Quality Assurance providers, is the first to measure the environmental impact of producing, using and disposing of all types of single use coffee cups, including the whole supply chain from growing trees, paper-making, plastic production, transport, cup and sleeve manufacture, delivery, and waste processing.

It found that each conventional single use coffee cup requires 0.58 litres of water to produce and has a carbon footprint of up to 60.9 grams of CO2e per cup. That’s because conventional, coated and compostable cups are all made from virgin paper.

The carbon footprint of the 2.5 billion cups that go to landfill in the UK is therefore over 152,000 tonnes of CO2e, the equivalent of 33,300 cars being driven for a year. Globally for the 500 billion cups, that’s over 30.4 million tonnes, the CO2 equivalent of providing electricity to 5,155,366 households – a city the size of Paris.

The analysis shows that if Frugal Cups replaced the more than 2.5 billion coffee cups used in the UK every year, the carbon saving would be approximately 90,315 tonnes of CO2e, which is the carbon equivalent of:

If the 500 billion paper cups consumed globally were replaced with Frugal Cup, we could save more than 18 million tonnes of CO2e, which would be the carbon equivalent of 42 million barrels of oil, driving around the world 1.8 million times or providing electricity to 3,058,173 households for a year – more than enough to power whole countries like Scotland, Denmark or Finland.

Replacing the UK’s more than 2.5 billion cups with Frugal Cup could also save 1.07 billion litres of water every year, the equivalent of 400 Olympic-sized swimming pools, and more than 990,099 trees. (This figure is based on 2006 US statistics that found 6.6 million trees were cut down to produce 16 billion paper coffee cups, therefore averaging 2,424 paper cups per tree and the Frugal Cup being made of 96% recycled paper).

Therefore, if the 500 billion paper cups used globally annually were replaced with Frugal Cup, we could save 215 billion litres of water and 198 million trees every year.

The LCA study shows how the Frugal Cup beat conventional, coated, and compostable cups in each environmental criterion and disposal method – recycling, incineration and landfill.

Intertek concludes in its 21-page study: “The Frugal Cup has the lowest environmental impacts under every life cycle scenario and by every environmental measure.

“This is because the Frugal Cup closes the loop by incorporating a high proportion of recycled content and it is more efficiently recycled.”

Ipswich-based sustainable packaging firm Frugalpac developed the Frugal Cup in response to the worldwide debate on the difficulty of recycling takeaway coffee cups.

In 2017, the UK’s House of Commons Environmental Audit Committee ‘Disposable Packaging Coffee Cups’ report found that only one in 400 cups actually get recycled with the vast majority of the more than 2.5 billion coffee cups consumed each year in the country going straight to landfill.

That’s because in the UK there is only one dedicated recycling plant and 53 industrial composting facilities that could process coffee cups.

But unlike conventional, compostable and cups that use virgin paperboard and PE (Polyethylene) or PLA (Polylactic acid) linings, 96% of the Frugal Cup is made from recycled paper with the remaining 4% a PE (Polyethylene) food grade liner.

The construction of the Frugal Cup allows ease of recycling again. This means it is the only coffee cup that can get recycled through standard recycling facilities across the UK.

The Environmental Audit Committee recommended that the Government set a target that all single use coffee cups disposed of in recycling bins should be recycled by 2023 and the industry should agree on the design of a disposable cup which can be easily recycled.

“This independent study conclusively proves that the Frugal Cup is the most environmentally friendly paper cup available and could easily become the standard if the major coffee chains accepted it.

“It’s the only cup that uses recycled paper and whichever way you dispose of it, still produces by far the lowest carbon and water footprints against conventional, coated and compostable cups.

“It’s increasingly clear that people and businesses have to live and work more sustainably. Recycling coffee cups is still a huge problem. There is only one dedicated waste facility in the UK to process conventional cups and 53 industrial composting sites that could process compostable cups. Increasing that capacity will cost tens of millions of pounds and take decades to achieve.

“The Frugal Cup has been specifically designed to go through conventional recycling facilities. Moving over to our cup will protect the environment, reduce carbon emissions, save billions of litres of water and stop millions of trees needlessly being cut down to produce single use cups made of virgin paper.”

The Frugal Cup is already being used in independent coffee shops across the UK and in universities such as the prestigious London School of Economics.

“Standard virgin paper cups with a plastic liner are extremely difficult to collect, sort, and recycle because of their components and construction. That’s why we decided to stock the Frugal Cup across all our catering outlets.

“Manufactured in UK – using a market-leading 96% recycled paper and no waterproofing chemicals – the Frugal Cup delivers considerable reductions in the use of energy and carbon. With such impressive Life Cycle Analysis results, the Frugal Cup was the only choice for us. Plus, as it is manufactured using recycled paper, it has already completed several loops of recycling prior to it becoming a cup, which means that the process is truly circular.

Further Frugalpac products due to be commercially launched in the next few months include a Frugal Bottle for wine and spirits and a Frugal Pot for ice cream, yoghurt, porridge and noodles.